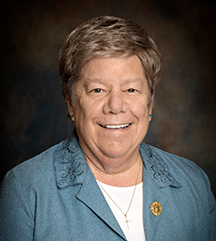 Sister Donna Dodge, SC, was elected President of the Sisters of Charity at Assembly 2019. To this position, Sister Donna brings rich and varied ministry experiences.

Her early ministry was in education, teaching at Visitation, Bronx, St. Joseph, and St. Mary, both in Yonkers. When she left education, she began and co-directed the Sisters of Charity Planning and Research Office (PRO). She went on to serve as Assistant to the President and Director of Planning at the College of Mount Saint Vincent, as Executive Assistant to the President and then Vice President for Mission and Planning at Sacred Heart University, Fairfield, Conn., and as Community Outreach Director for Catholic Charities in Bridgeport, Conn.

After a term as Assistant to the President of the Sisters of Charity, 2007–2011, Sister Donna became Executive Director and CEO of the Sisters of Charity Housing Development Corporation. This ministry oversees and coordinates a growing number of housing projects which the Congregation sponsors in Manhattan, Rockland County, and Staten Island, offering affordable and supportive housing to seniors, persons with disabilities, and families in need.

Sister Donna entered the Congregation in 1966, as change was sweeping society, church, and religious life; flexibility and adaptation to change have been a constant in her life. She is a woman of creativity, vision, persistence, and humor, among many other talents. She has a fondness for puns and quips. Her sharp and ready wit has eased many a tense moment. She is also a model of ecological reverence—she won’t even kill a fly or mosquito. She has an affinity for naming all with which she relates; she named her car, a Forester, Redwood.

The influence of several wise mentors and outstanding colleagues has enriched Sister Donna’s life, a fact she gratefully acknowledges.

Sister Donna is a graduate of St. Rita and Holy Cross Schools, and Cardinal Spellman High School, all in the Bronx. She holds a BA in Psychology  from the College of Mount Saint Vincent, an MA in Religious Studies from Fordham University, and an Ed.D in Higher Education Administration from Teachers’ College, Columbia University.