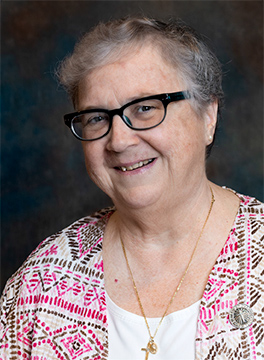 Sister Claire is serving in congregational leadership as a first-term Councilor.

Her first ministry was as Assistant Administrator at St. Joseph’s Hospital, Yonkers. For the next five years, she served as a client advocate at Little Sisters of the Assumption Home Health services. When Elizabeth Seton Housing opened in Manhattan as a permanent residence for families, she was asked to become its first director, serving in that capacity until 1997.

Following that mission, Sister Claire’s ministries involved endeavors in the areas of justice, peace, and corporate responsibility. From 1997 to 1999, she was a program assistant at the Interfaith Center for Corporate Responsibility in New York; she was named congregational Justice Effectiveness Coordinator, the result of one of three future-oriented directions chosen by Assembly 1999.

Before her election as Councilor, Sister Claire was a staff member at the Federation-sponsored House of Charity, located in New Orleans, Louisiana. Beginning in 2010, Sister Claire and members of several Federation congregations created an inter-congregational place of welcome and service. They planned programs involving young adults, and students from colleges and universities including the College of Mount Saint Vincent, who volunteered time to help in the rebuilding and refurbishing of homes destroyed by Hurricane Katrina. Her local community also invited young adults to join them for periods of prayer and vocation discernment.

One of Sister Claire’s favorite activities, which she is sure to miss, is taking part in Mardi Gras celebrations in her adopted city, NOLA.

Sister Claire entered the Sisters of Charity in 1982. She attended the Bronx High School of Science, earned a BA in Economics from Fordham University, and an MM in Hospital and Health Service Administration at JL Kellogg graduate school of Management. She received a certificate in Bereavement Counseling in 1988; recently, she completed a program in Vincentian Spiritual Direction.