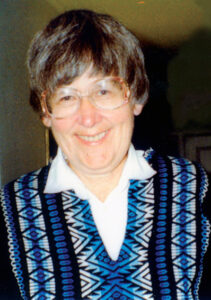 As we walk through life, the average person meets a few hundred thousand people. I venture to say that perhaps one hundred of them make a lasting impact on each of us. I first met Sister Barbara Ford in 1996. In one morning, she clearly became one of the one hundred people who would make a lifelong impact on me.

As the new Development Director for the Congregation, I was eager to meet as many Sisters as possible. Each had their own wonderful stories of ministry that motivated me. I could easily steward their stories to our many benefactors. Early on this December day, Sister Arleen Ketchum called and asked if I had time to meet “Bobbie.” A few hours later, as Bobbie and I sat and talked, I realized this was a woman of achievement, a woman with goals, and, most likely, the humblest person I would ever meet.

Having done some homework, I knew Bobbie had been an educator, a nurse, a midwife, a spiritual counselor, and now a missionary. I knew her Sisters loved her, and I knew well that I should listen to her needs.

Bobbie did not just present a few items she hoped we could fund; she explained why each was so important.

Above all, Bobbie taught me the difference between serving the poor and walking with the poor. I finally understood the meaning of charism! In two hours, I was hooked. Whatever need for the people of Guatemala was presented to me, I would strive hard to figure out a funding source.

On Sunday morning, May 6, 2001, Sister Dorothy Metz called me at home to tell me Bobbie had been murdered the day before in Guatemala City. Sister Dorothy, a close friend of Bobbie’s, was saddened and upset. How could the people Bobbie loved so much take her life? Yes, I was initially angry, but as the news settled in, I realized how upset Bobbie would be at my anger. I knew she would not be angry, and I knew she would be forgiving. I prayed and thought and soon accepted. I became thankful that she could forgive. I knew I, too, had to forgive.

Over the next few days, I learned that Bobbie’s mother also forgave. I spoke with her at Bobbie’s wake and heard such love and forgiveness. I listened to the forgiving words of Bishop Julio Cabrera Ovalle, who accompanied her body to New York, as he cried at her funeral mass. It was a mass of forgiveness.

Sister Barbara Ford was a woman of love, compassion, hard work, leadership, service and forgiveness. Indeed, she is a woman I will remember always.