Abigail Nathan, a sophomore at the College of Mount Saint Vincent, conducted research and wrote her paper on Sister Barbara Ford for her course, “Catholicism and the History of the Sisters of Charity of New York.” Her paper is titled “The Motivated Murder of Sister Barbara Ford.” The following is an excerpt of Abbie’s work. 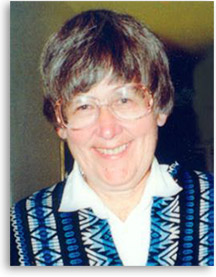 Sister Barbara was an educator, a nurse, a midwife, a spiritual counsellor, a missionary and a Sister of Charity of New York. She dedicated her life (as a missionary in Guatemala) to helping the indigenous farmers, women, children, and the elderly after Guatemala’s Civil War. She taught them the necessary skills to relieve their impoverishment, and to recover from their psychological wounds caused by the country’s long civil war.

While serving as Health Coordinator for the Diocese of Quiche, Sister Barbara Ford took part in recovering bodies that were disposed of in mass unmarked graves. She established mental health programs for those who survived the Guatemalan Civil War, to help them deal with the trauma, loss and pain they had endured from the country’s long, violent history. Sister also helped to begin and complete a project to provide water for the poor people in the small villages. This water project was difficult, but very successful. Her many efforts and kindnesses caused her to be beloved by the indigenous people.

On May 5, 2001, Sister Barbara Ford was shot numerous times in what was an apparent robbery attempt in Guatemala City. Despite the controversial topic in regard to whether or not Sister Barbara’s involvement with aid relief programs resulted in her assassination or it truly was a robbery attempt, she loved the Guatemalan people, and gave her life for them.…Her consistent devotion and sense of service are what makes her a modern-day saint and martyr.

Abigail presented her paper on Thursday, April 25, at the Humanities Undergraduate Symposium at the College of Mount Saint Vincent, which was well attended by students, faculty, and visitors.

Congratulations on your fine paper, Abigail, and thank you for reminding us all of Sister Barbara Ford’s life-giving and selfless love.