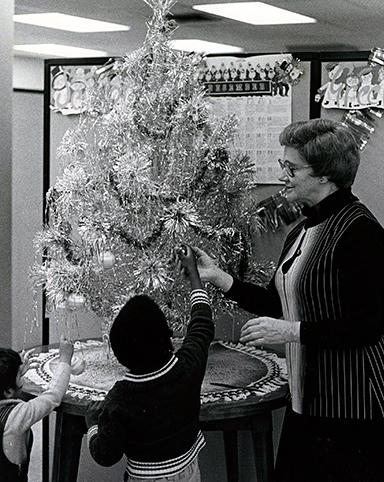 Almost every Sister of Charity has a story to tell. Unfortunately, many choose not to tell it or have it told. My friend, Sr. Mary Kelly (Sr. John Mary), was one of these Sisters. I realized this recently when I learned so many in the Congregation never knew her. Don’t get me wrong; Mary was quite independent and liked it that way. As I reflect on my early days in Brooklyn and the many people who have become personal heroes, I can’t help but think of Mary Kelly.

Certainly, Sr. Rita Meaney (deceased 10/20/17) was also such a hero. But she and I acknowledged that we shared a hero, a woman of great talents, of great simplicity, and a woman of courage and commitment to the mission. Our common hero was this great person, Sr. Mary Kelly.

This hard worker who sacrificed much passed away on August 28, 1995. She entered the Congregation on September 8, 1933, and was  missioned at Seton Hospital in Huguenot before caring for Brooklyn’s children for over fifty years. I met her in 1970 when I went to work at St. Joseph Hall on Willoughby Street in Bed-Stuy, Brooklyn. Many of the Sisters I have met since then did not know Mary Kelly; the “Brooklyn crowd” was fortunate. From about 1977 to 1981, I was Sr. Mary’s supervisor. The day that happened, we both had a great laugh because we both knew the reality: except on paper, it was never going to happen.

I know of many individuals whose lives were changed by Sr. Mary Kelly’s love. Our driver at St. Joe’s, Nilo, would do whatever she asked. One day I asked him why he was so willing to help Sr. Mary. His response was, “Bill, you will never know how good she has been to my wife and me. I also see her caring so lovingly for the girls. I could never say no.” 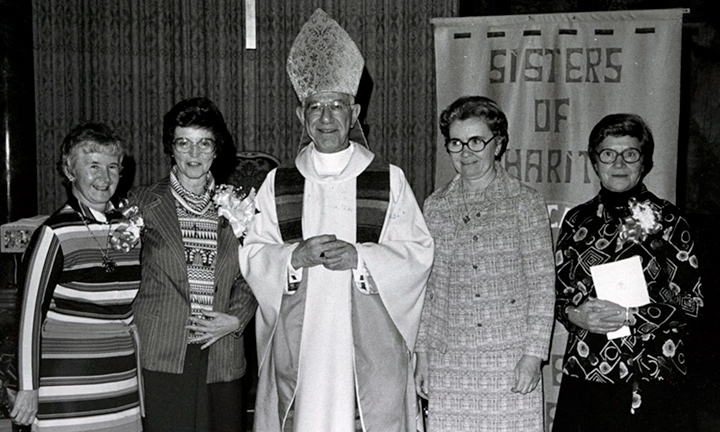 A social worker was married to a young man suffering great depression. They had a three-year-old son when he took his own life, crushing his wife and son’s lives. Sr. Mary stepped right in and cared for her. About five years later, the young mother remarried and was able to move forward. She told me that Sr. Mary’s love was the reason.

Sr. Mary Kelly was a Group Mother before I knew her. I knew her as the support staff administrator by day and a group home mother on Linden Boulevard by night. She thrived caring for these young women, helping them study, fighting to get them into Bishop McDonnell, returning them to the house as they climbed out windows at night, and helping them resettle as they aged out of the foster care system. Most have never forgotten her. When one young lady was married, it was Sr. Mary Kelly who gave her away.

Sr. Mary once shared with me that she never felt she was called to religious life, but she felt called to be a mother. She added, “I got the best of both worlds and didn’t have to tolerate a husband.”

As my own children were born, she was always supportive and offered me many tips on how to love a child—with some discipline, much love, support for their ideas, and a sense of humor! I often think that I was a better father because of our talks.

Sr. Mary had a great love for children and those living in poverty. She was also a great fan of the Rev. Dr. Martin Luther King, Jr. After his assassination, she helped develop an annual celebration at Cadman Plaza in Brooklyn to honor him. A secret that Sisters Rita Meaney, Joanne Ward, Jane Hoehn, and I shared was our commitment to pray every morning to Sr. Mary Kelly for President Obama’s safety. She came through for us!

Sr. Mary Kelly left Ireland for the U.S when she was a teenager, but she retained a great love of family. “Auntie Mae” often visited with relatives in Canada, Florida and New Jersey. She always spoke fondly about her early years in Ireland.
In the late 1990s as I discovered the Sisters of Charity Associate Program. I realized it was an opportunity to share with others the gifts Sr. Mary had given me. 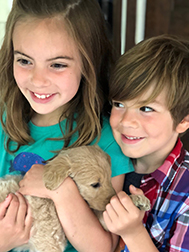 Bill’s grandchildren with their new puppy

Bill, an Associate of the Sisters of Charity of New York, previously worked with the Sisters of Charity for thirty years at St. Joseph Hall (Children’s Services), 1970–91, and as the Congregation’s Director of Development, 1996–2014. Today, Bill is a volunteer at Country Kid’s Food Pantry in Washingtonville, N.Y. He volunteers in the Congregation’s Office of Peace, Justice and Integrity of Creation as chairperson of the Immigration Committee and member of the PJIC Think Tank. Bill is a strong advocate for social justice. He and his wife, Madeline, have three children and two grandchildren.