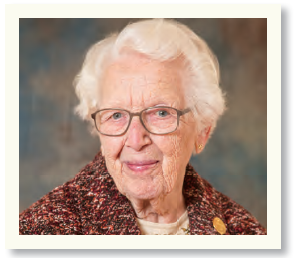 During her 75 years as a Sister of Charity, Sr. Miriam Anne Brennan has personified the American Nursing Association definition for nursing: “the protection, promotion and optimization of health and abilities; the prevention of illness and injury; the alleviation of suffering through the diagnosis and treatment of human responses; and advocacy in health care for individuals, families, communities and populations.” And she has done it with an infectious smile and warm heart that transcends that definition.

When she entered the Community in 1939 she had not intended to become a nurse. True, as a Holy Cross Academy senior she had visited St. Vincent’s Hospital in New York, but her “real desire” was to become a Sister of Charity, not a nurse.

In fact, a year after she entered the Community she was sent to St. Paul School in Brooklyn, where the pastor jokingly told her that the last third grade teacher had ended up in a mental institution. But did that frighten Sister Anne? Not a bit. The children were poor and, some might say, “Brooklyn tough.” But she loved it. A year later when she was missioned to St. Margaret of Cortona School in Riverdale to teach the second grade, she was still a very happy teacher and would have been more than content to continue those “wonderful, wonderful days.” 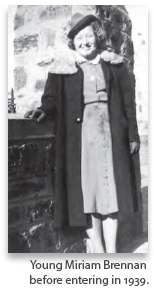 Perhaps that high school visit to St. Vincent’s had been a premonition of things to come. She would continue to teach but her expertise would no longer be confined to a parish school classroom. In 1944 Sister Anne and three other sisters enrolled in the nursing program at the College of Mount Saint Vincent. One day a week they went to St. Vincent’s Hospital in Manhattan for clinical practice, and during their second and third years, all their classes were held at the Hospital. At the end of her studies, Sister Anne was awarded dual degrees, a BSN from the College and a diploma from St. Vincent’s School of Nursing.

World War II was still going on and she was excited to be included in the research the Hospital was doing, because many of the soldiers were coming back with Hodgkin’s disease. Her first assignment as an operating room nurse was not a happy experience. Seeing people, and then not seeing them again after the operations because they went back to their rooms, was quite upsetting. It was not what she wanted to do forever. But a blessing came from that experience and Sr. Anne is big on “trust in God and His blessings.”

Her next assignment was to the OB GYN Unit where “everything was alive and upbeat, centered on life and looked to the future.” As the Administrator of the Unit she had the opportunity to take care of mind, body, and spirit. It was not piecemeal work and she loved working in pastoral care and student supervision, along with her regular nursing duties.

During this time the idea of natural childbirth was becoming popular and, in the evenings, Sr. Anne held maternity classes for patients, nurses, students, and even expectant fathers. With Dr. Jere Faison she helped to create the first Premature Ambulance “Preemie Transport” and Premature Center in New York City. By using city money and private financial aid, at-risk babies born prematurely at other hospitals were brought to St. Vincent’s to receive the latest in neonatal care. 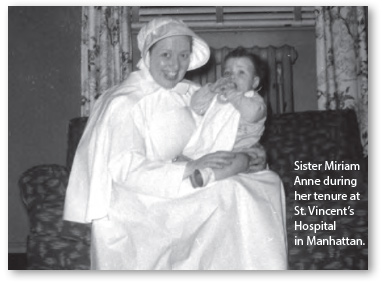 It seems almost serendipitous that Sr. Anne herself was a one-and-a-half-pound preemie, and like other babies of that size, was not expected to live. Her parents, Mary and Thomas, kept their only child warm in a laundry basket surrounded by hot water bottles. And now she was able to provide the latest expertise and care for these tiniest of babies.

She truly loved her years in obstetrics and may have been a bit disappointed when, in 1957, she was sent to begin a new two-year School of Nursing at St. Vincent’s Hospital on Staten Island. The work was exciting and challenging and, as she had done and would continue to do throughout her nursing years, she multi-tasked bravely and with a great deal of enthusiasm as the Director of Nursing.

These were wonderful years for her. She loved the intimacy of Staten Island because she really got to know the Sisters, the staff, the students, and the patients as friends and as family. And it was here that she began her lasting friendship with Sr. Mary Linehan.

Nine years later, in 1966, she was once again open to the Spirit when the General Assembly felt the need for a consultant for the Sisters’ health care. They initiated the position of Health Care Coordinator and Sister Miriam Anne was chosen for the job. (This was the first time that one sister was appointed by the Council to oversee the health care for the entire community.)

With no real job description at hand, she sought advice from the Sisters, nurses, and Dr. Raymond Boller, Personnel Health Director at St. Vincent’s in Manhattan. As Coordinator she was responsible to address the health needs of all the sisters, to introduce them to the newest trends in preventive health, to help them understand and accept the fact that, even though they were all self-sacrificing people (as their own mothers had been), they still needed to embrace a common-sense attitude about their own health. Her own common-sense approach to life, her wit, her compassion, and her inborn positive outlook on life were useful tools for her success in this undertaking.

Her eternal optimism went with her to St. Joseph’s Hospital in 1970 when she became Director of its School of Nursing P.N. Program and then Assistant Director for In-Service Education for Nurses.

In 1981 she became the Nursing Administrator for the Convent of Mary the Queen, the retirement home for our Sisters, along with another term as Community Health Coordinator. She then undertook the task of part-time coordinator of nursing services for the Sisters at the Convent of Mount Saint Vincent.

For the last six years she has been volunteering her services at Mount Saint Vincent Convent, where she now lives, as a “ward clerk.” However, Sr. Anne is a special type of ward clerk: her health expertise, her cheerfulness, and her enthusiasm for all of life are sources of comfort to all those who live in the Convent. She also likens herself to “an old shoe in the closet—one which people take out when they want comfort.” Well, we all know that, after 75 years as a Sister of Charity, she is most certainly more than that. She truly brings an enormous amount of comfort to all and she does it with a thankfulness to God and the Congregation for trusting her, training her, and giving her responsibilities that have made her life fulfilled. It is a trust that has been well placed.