“She was a patient, kind, and compassionate person, ever-faithful and prayerful, as well as a very loving member of both her local community and the Sisters of Charity.” 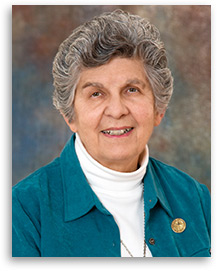 Sister Pauline Cinquini (Sister Peter Marie) was born on November 14, 1933 in Long Island City, New York, the only child of Paul and Elizabeth Collins Cinquini. Pauline graduated from the Academy of the Holy Child and Cathedral High School, then worked for several years before entering the Sisters of Charity of New York on September 8, 1958. Sister Pauline earned
a BA in English from the College of Mount Saint Vincent, an MA in English from Manhattan College, and an MA in Pastoral Ministry from Immaculate Conception Seminary in New Jersey.

Sister Pauline began her work with children at the New York Foundling Hospital and the Holy Name Day Nursery, both in Manhattan. Her ministry in education spanned thirteen years, during which she taught in Saints Peter and Paul and Blessed Sacrament Schools in the Bronx, Holy Name and Saint Brigid Schools in Manhattan, and Resurrection Academy in Rye. Beginning in 1973, Sister Pauline spent two years at the House of Prayer at Xavier Center in Convent Station, New Jersey. She and several sisters then began the Elizabeth Seton House of Prayer at Immaculate Heart of Mary Parish in Scarsdale, New York, in 1975. From 1975 on, Sister Pauline worked in the House of Prayer Ministry as a retreat director, and director of spiritual programs on local, national, and international levels. In 1988, she was named Liaison for the Charismatic Renewal for the Archdiocese of New York. In 1996, the parish of Immaculate Heart of Mary in Scarsdale asked her to direct its Adult Education Program and four years later she also became Director of the Rite of Christian Initiation of Adults (RCIA) for the parish. During all of these years, Sister Pauline continued her prayer programs and retreats as part of the House of Prayer ministry.

A very talented musician, Sister Pauline provided music for countless retreats and programs. She was a major participant in the music ministry at many charismatic conferences and was privileged to play and sing for Pope John Paul II during one of her many visits to Rome.

Sister Pauline, along with the many other sisters involved in the charismatic renewal ministry, urged others to listen to the Spirit speaking in their lives and be open to the guidance and the will of God. She was a patient, kind, and compassionate person, ever-faithful and prayerful, as well as a very loving member of both her local community and the Sisters of Charity. Sister Pauline now rests in God’s presence, knowing infinite love and peace, and rejoicing with her family, friends, and the Sisters of Charity who have gone before her.

Be happy, Sister Pauline, with the God whom you served so well throughout your life.