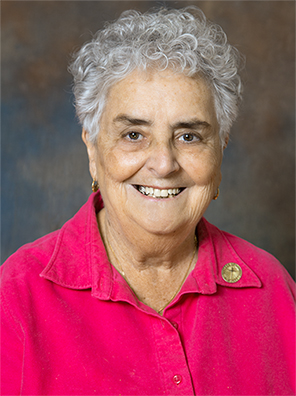 Sister Patricia Ann Brennan, formerly Sister Maureen Margaret, was born March 9, 1934, in Brooklyn, New York. She was one of three children, two daughters and a son, of Robert and Margaret Jennings Brennan. Pat attended Saint Andrew Avellino Elementary School in Flushing and Saint Agnes Academic High School in College Point, both in Queens, New York. She worked for three years before entering the Sisters of Charity of New York on September 8, 1956.

Sister Maureen Margaret earned a BA in History from the College of Mount Saint Vincent and an MSW in Social Work from Fordham University, both in the Bronx. She was certified by New York State as a Social Worker, a Practitioner, and a Supervisor of School Social Workers.

Sister Patricia served 11 years in elementary education ministry at Saint Stephen, Manhattan, Saint Agatha, Nanuet, Saint Barnabas and Saint Athanasius, both in the Bronx. She also served for two years as a childcare worker at Saint Agatha and three years in parish ministry at Saint Mary, Grand Street in Manhattan, before undertaking two years of full-time study in social work.

Sister Patricia’s thirty-two years of social work were devoted to the New York Foundling, Manhattan, Saint Augustine School, the Bronx, Queen’s Daughters Day Care, Yonkers, Grace Institute, Manhattan, and Fox House, also in Manhattan. After retiring from full-time ministry in 2009, Sister Patricia continued at Fox House as volunteer for two years and then devoted the next seven years as a coordinator in a safe house for victims of human trafficking. In 2018, she joined the community of retired Sisters of Charity at Kittay Senior Apartments in the Bronx. It is here she died on September 5, 2021, in the 65th year of commitment as a Sister of Charity of New York.

Sister Patricia had a strong loving bond with her family, particularly her nieces and nephews, and was always present for events, large and small, in their lives. They knew where to turn for sage advice or to tell their latest news. Aunt Pat stories will continue to be remembered and enjoyed by the family.

Sister Patricia often shared that the most memorable event of her years in ministry, an event she named a “grace,” was her presence at the birth of a baby boy. Through the years she and the boy’s family have stayed in touch, taking cross-country trips to visit each other. Sister Patricia’s down-to-earth approach to life and her unique gifts of empathy and respect were natural outlets for the charism of Charity, making a difference in the lives of hundreds of children and their families.

Sister Patricia, you combined a distinctive flair for life with living contemplatively. Your prayerful spirituality put the name of Jesus on your lips and in your heart. The Joy of your life now meets you with a warm and welcoming embrace. Rejoice in the house of our God!

Leave a Reply to Eileen and Joe Candella Cancel reply