As an excellent educator and an ardent advocate to advance services for children and families in need, Sister Mary Jane left her mark as compassionate, kind, thoughtful and concerned about others. 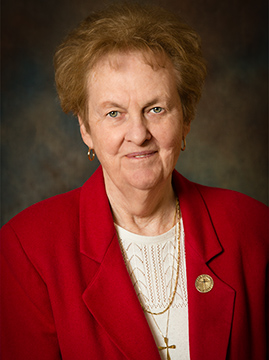 Sister Mary Jane Fitzgibbon (Sister Mary Baptista) was born April 9, 1933, in New York City, one of four children — three daughters and one son — of George and Laura Duggan Fitzgibbon. Mary Jane attended Resurrection-Ascension School, Rego Park, Bishop McDonnell High School, Brooklyn, and worked for several months for the New York Telephone Company before entering the Sisters of Charity on September 12, 1951. Sister Mary Baptista earned her BA in Spanish from the College of Mount Saint Vincent and her MA in Spanish from Fordham University. She later earned NYS permanent certification for teaching Spanish and Certification in Techniques in Publicity from New York University.

Sister Mary Jane spent twenty-two years in education on both the elementary and high school level. She taught the lower grades at Our Lady of Angels School, Bronx, and then at Elizabeth Seton Academy, Yonkers. She was later assigned to teach Spanish at Cardinal Spellman High School and Saint Raymond Academy, both in the Bronx, and Saint Joseph by-the-Sea High School, Staten Island. In 1976, Sister Mary Jane began twenty-seven years of ministry in Public Relations work. She became the Director for Public Relations at the New York Foundling and later the Director of Public Relations at Abbott House, in Irvington, NY, an association that provides services for children and families in need and adults with disabilities. Between these two positions, she studied in the pastoral ministry program at Calvary Hospital. While serving at the New York Foundling, the Catholic Institute of the Food Service honored Sister Mary Jane at a special reception in the Hotel Pierre in Manhattan. In 2004, Sister Mary Jane was appointed the Administrator of Mount Saint Vincent Convent, a retirement community of the Congregation, a position she held until 2008 when she retired. Throughout her retirement, Sister continued various volunteer services until she moved to Mount Saint Vincent Convent in 2015. As more complex illnesses impacted her health, Sister Mary Jane moved to Cabrini of Westchester, Dobbs Ferry, NY, where she died on April 3, 2019.

As an excellent educator and an ardent advocate to advance services for children and families in need, Sister Mary Jane left her mark as compassionate, kind, thoughtful and concerned about others. She expressed her interest in others by being a good listener. Sister also had a wonderful sense of humor and a genuine love for all God’s creation. She loved to travel and to spend time with family and friends.

With opened arms, Sister Mary Jane, God welcomes you to the place in the kingdom prepared for you. Here family, friends and the Sisters of Charity who have gone before you join in saying, “Welcome home.” Rest in peace.

Burial
Cremains to be buried at a later date