“My interests rest with contact among the students over any college function.” 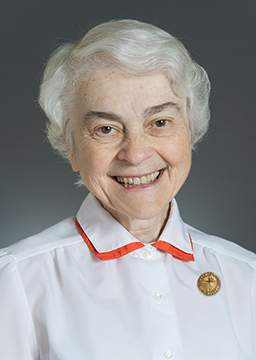 Elizabeth attended three elementary schools, beginning at Saint Francis of Assisi School in Mount Kisco, New York, then PS 17 in Yonkers, and graduating from Saint Mary Star of the Sea on City Island. She then attended Saint Barnabas High School, Bronx, before entering the Sisters of Charity of New York on September 8, 1953.

Sister Edward earned her BS in Biology from the College of Mount Saint Vincent, her MS in Biology from Fordham University and her PhD in Microbiology from the University of Maryland, College Park. She also obtained NYS Permanent Certifications in elementary education, biology, chemistry and general science (grades 7–12), and the supervision of chemical laboratories.

Sister Mary Edward spent more than sixty years in the ministry of education, fifty-eight as a classroom teacher and four as a student for her doctorate in microbiology. Her first five years of elementary school teaching were at Holy Trinity, Manhattan, and Saint Peter, Yonkers, after which she taught at Saint Raymond Girls High School in the Bronx for three years. Her four years of doctoral studies included teaching undergraduates, a requirement for the fellowships, assistantships, and grants she earned.

After receiving her doctorate, Sister Edward was assigned to College of Mount Saint Vincent where she taught in the Biology Department for the next fifty years. During these years, she served as Associate Professor and Professor of Biology, specializing in the areas of bacteriology, immunology, and microbiology. Former students who went on to graduate and medical schools knew themselves prepared above and beyond for their studies.

In addition to her teaching responsibilities, Sister Edward served as Chair of the Biology Department and Superintendent of the Science Hall for several years, while continuing her professional development through course work, conferences, and symposia. She continued to publish widely, was in demand as a graduation speaker, science fair judge, and mentor for anyone interested in a medical or scientific career. The list of college activities and committees in which she was involved is long, but as she self-declared, “My interests rest with contact among the students over any college function.”

In 1990, Sister Edward received the Sears-Roebuck Foundation “Teaching Excellence and Campus Leadership Award.” In 2010, she was the recipient of the distinguished Ad Laudem Dei medal of College of Mount Saint Vincent for her lasting contributions to the field of biology and for embodying charity in her unique spirit of giving. She will be long remembered by the students she taught and the colleagues with whom she worked over these memorable fifty years.

We know Sister Edward for her broad smile and ready sense of humor, for her generosity with time and talent, and for her boundless energy. What we may not know is her love and care of nature, her oil and watercolor paintings, and her interest in other cultures which motivated her to visit many countries.

Rest in peace, Sister Mary Edward, Professor Emerita. We know you are now welcomed into your everlasting home where your faithful life as a Sister of Charity for sixty-six years is one with God.