“Sister has not only been a guide here, she’s been a leader, a mother to the children, and a friend.” 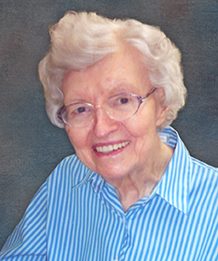 Sister Marie Daly (Sister Mary Placida) was born on October 3, 1927 in Manhattan, one of two children of Patrick and Julia Griffin Daly. Marie attended Corpus Christi School and Cathedral High School, both in Manhattan, before entering the Sisters of Charity of New York on February 2, 1946. Sister Marie received a BA in English from the College of Mount Saint Vincent and an MA in Education and Curriculum from Fordham University. She later earned New York State Permanent Certification in English and Administration.

Sister Marie’s active ministry was entirely in the field of elementary education. From 1947 until 1969, she taught in the following elementary schools: Saint Raymond, Bronx; Saint Joseph, and Saint Ignatius Loyola, Manhattan; Saint Gabriel, New Rochelle; and Saint Gabriel, Bronx. In 1969 Sister Marie was appointed principal of Saint John Evangelist School, in White Plains, and served there until her retirement in 1994. Known for her readiness to help working parents, Sister Marie developed a full-day kindergarten in 1985, one of the first in White Plains, as well an after-school program, of which she was very proud. Upon her retirement, her secretary was quoted as saying, “I always tease her and ask her which hat she is wearing today. She does so many different things —principal, teacher, nurse, family counselor, friend….I can’t imagine the school without her.” One of the teachers commented that, “Sister has not only been a guide here, she’s been a leader, a mother to the children, and a friend….She is the most professional person I have met in a long time.” After retirement Sister Marie continued volunteering in the parish for many years. In 2008, she went to the Convent of Mary the Queen where she enjoyed the company of her sisters and the special liturgies, prayer and celebrations that were part of their life together.

Sister Marie Daly was an educator and administrator par excellence. She was also a kind, compassionate, understanding and loving person. She knew how to cultivate the gifts and talents of those around her and help them achieve their full potential. She was a blessing to all those with whom she lived and worked. We rejoice with her now as she enters into the joy of her eternal reward and is greeted by the voice of our loving God, “Well done, good and faithful servant.” Be at peace, Sister Marie.