A kind, quiet and dedicated person, Sister Louis loved the children for whom she cared and taught during her years of ministry. 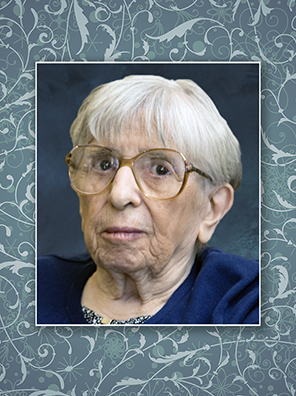 Sister Maria Louis Octavio (Josephine) was born March 18, 1918, in Danbury, Conn., one of six daughters of Louis and Angela Angrilli Octavio. Josephine attended Main Street School and Danbury High School then enrolled in The New York Foundling Hospital Child Care Program a few years after graduation. She worked at The New York Foundling before entering the Sisters of Charity of New York on February 2, 1951.

Sister Louis began her 38 years of active ministry by continuing her service at the New York Foundling as Assistant to the Director of the School of Child Care for 13 years. She dedicated the next 25 years as an elementary educator, serving at Saint Peter in Poughkeepsie and Sacred Heart in Staten Island.

During her time at Sacred Heart, Sister Louis decided to become a docent during the summer months at the Shrine of Saint Elizabeth Seton in Emmitsburg, Md. She began the necessary study and training for this role and offered her services every summer for 20 years. During this time, the staff shared testimonials on the service she offered to the Shrine visitors. In an article found in The Seton Way in 2005, Sister Louis said, “Reflecting on the history of the foundation of our community and of the early sisters … has been most enriching. It has put me in touch with the pioneer Mothers and Sisters of the early 1800s.”

Sister Louis retired at Mount Saint Vincent Convent in 1991 and continued her volunteer service at the Elizabeth Seton Library of the College of Mount Saint Vincent for several years. In 2018, she moved to Saint Joseph’s Nursing Home, now known as Yonkers Gardens, where she died September 29, 2021, in the seventy-first year of commitment as a Sister of Charity of New York.

A kind, quiet and dedicated person, Sister Louis loved the children for whom she cared and taught during her years of ministry. In retirement, she enjoyed trips to New York City to visit museums, concerts, and other art and culture venues.

We rejoice with her now as she enters God’s full presence, reunited with her family, friends and the Sisters of Charity who have gone before her. Be at peace, Sister Louis.