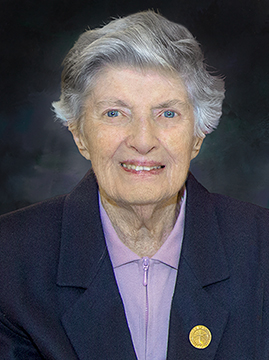 Sister Margaret Sweeney (Sister Mary Jeremiah) was born October 24, 1921, in Manhattan, one of two children, a son and a daughter, of Jeremiah and Mary Dougherty Sweeney.

Margaret attended Saint Thomas the Apostle Elementary School and Cathedral High School, both in Manhattan, and continued education for two years at Hunter College and Drake Business School. Margaret gained work experience for five years before entering the Sisters of Charity of New York on September 8, 1946.

Sister Margaret began her forty-nine years of active ministry as a teacher in Saint Joachim School, Beacon, New York, in 1948. In 1950, her “temporary transfer” to Saint Vincent’s Hospital, Manhattan, lasted for forty years in which she filled various positions of increasing responsibility. She served as Supervisor and as Assistant Controller in the business office and continued in roles with increased administrative authority in various departments.

The knowledge Sister Margaret gained from the varied responsibilities well-prepared her for appointment in 1980 as President and Chief Executive Officer of the hospital, then known as Saint Vincent’s Hospital and Medical Center of New York. Two significant achievements of her administration were developing a master plan for modernization and the initiation of several community-responsive programs. In 1990, she transitioned her management and governing skills to the College of Mount Saint Vincent, serving for seven years as Vice-President for Administration, beginning with then-President, Sister Doris Smith, and continuing with Dr. Molly Stuart. 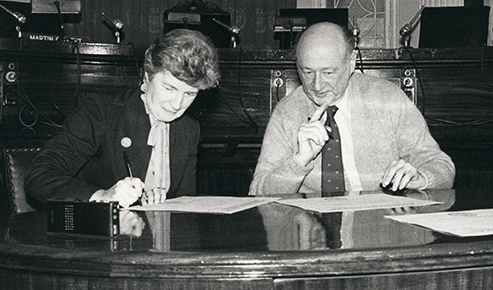 In her years of active ministry at Saint Vincent’s Hospital, Sister Margaret served on various Congregation committees and as an advisor to its Board of Trustees and Pension Board. She held office on the parish council of Saint Joseph Church, Greenwich Village, and was a member of the New York State Advisory Committee on Health to the Conference of Bishops.

Sister Margaret spent the early years of retirement organizing the archives of Saint Vincent’s Medical Center. She then joined the retirement communities at Mount Saint Vincent Convent, Convent of Mary the Queen, Yonkers, and Schervier Nursing Care Center in the Bronx. In early 2021, Sister Margaret moved to Cabrini of Westchester, where she died April 11, 2021, in the seventy-fifth year of commitment as a Sister of Charity of New York.

Sister Margaret devoted a lifetime to improving health care for persons whose life circumstances were lived in poverty. This mission-driven focus offered quality care with genuine compassion. We rejoice in the belief that she is welcomed home by a loving and merciful God. Rest in peace, Sister Margaret.

Wake
Flynn Funeral Home
Central Avenue, Yonkers
Saturday, April 17, 8–9 am, masks must be worn
Prayer and Sharing of Memories at 8:30 am
Live-streaming at 8:30 am: https://venue.streamspot.com/d286a8ab

Funeral
St. Margaret of Cortona Church, Bronx
Saturday, April 17 at 9:45 am, masks must be worn
Live-streaming at 9:45 am: https://venue.streamspot.com/217aa3db