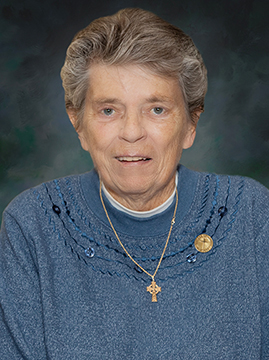 Sister Katherine King (Sister James Miriam) was born July 18, 1937, in Manhattan, one of five children, one son and four daughters, of James and Mary Higgins King. Katherine attended Saint Paul Elementary School, All Saints Branch of Cathedral High School for two years and graduated from Assisium High School, all in Manhattan. She worked for about two years before entering the Sisters of Charity of New York on September 8, 1958.

Sister Katherine’s forty-four years of active ministry have been devoted to the care of children. After a short time at Saint Joseph Hall in Brooklyn, Sister Katherine was missioned to the New York Foundling in Manhattan as a childcare worker for six years. She then moved to Saint Agatha Home in Nanuet, New York, where she continued her care of children for the next thirty-eight years. Her supervisory responsibilities increased during these years as she applied her best experience and knowledge to addressing the needs of the children in her care.

When Saint Agatha Home closed in 2005, Sister Katherine moved with other Sisters of Charity to Seton Village, a senior residence in Nanuet. She volunteered her services in the office of the Resident Director and generously ran errands for other residents.

Sister Katherine remained close with her family, particularly in presence to her brother, George. Sister Katherine was a good cook, and her meals were often a shared occasion for the enjoyment of all. Family connections to the New York Giants made her a natural and faithful fan, cheering them on to victory.

After a brief illness, Sister Katherine died April 6, 2021, in Good Samaritan Hospital, Suffern, New York, in the sixty-third year of commitment as a Sister of Charity of New York.

Sister Katherine, those who know you describe you as an all-around good person. You have now completed your journey to “. . . the things that no eye has seen, and no ear has heard . . . all that God has prepared . . .” (1Cor 2:9). We rejoice in the belief that the faithfulness of God’s promises will come to full accomplishment in you. Rest in peace.