…These skills helped form a creative spirit that encouraged her to think outside the box to improve the quality of life of those in her care. 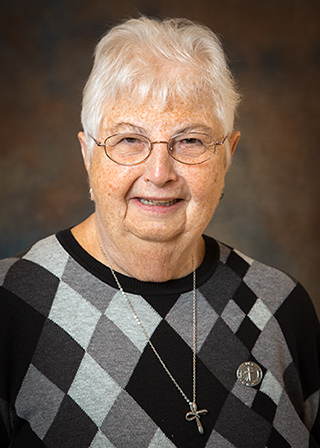 Sister Elaine Owens (Sister Marie Ella) was born February 8, 1941, in Staten Island, New York, one of two children — a daughter and son — of Cornelius and Ella Ackalitis Owens. Elaine attended Blessed Sacrament Elementary School and Saint Peter High School, both in Staten Island, before entering the Sisters of Charity on September 8, 1958. Sister Marie Ella earned a BA in History from the College of Mount Saint Vincent and a Master’s in Social Work from Fordham University. Additionally, Sister Elaine was certified by New York State as an alcoholism counselor and as a social worker.

Sister Elaine spent twenty-eight years in education. Her first mission in 1961 was at Resurrection in Rye, followed by Holy Name in Manhattan and Saint Brigid in Manhattan, where she was also the principal. In 1978, she became Director of Elementary Education for the Congregation, a post she held until 1984. Following a sabbatical at the Jesuit School in Berkeley, California, where she earned a Certificate in Theological Studies, she joined the Parish School Planning Office in the Archdiocese of New York in 1987 where she worked until 1991, first as Assistant to the Director and then as Director. From 1991 to 1996 she was a chemical dependency counselor, clinical coordinator and Director at the International Center for the Disabled in New York City. This was followed by three years at New York Foundling where she served as Director of Spiritual Development. From 1999 to 2018 she ministered in a variety of congregation assignments. From 1999 to 2007 she served two terms on the Council as Regional Coordinator. This was followed by years of service to our senior Sisters in a variety of capacities: Coordinator of Life Enrichment for Mount Saint Vincent Convent, Convent of Mary the Queen, Saint Patrick Villa; Administrator at Mount Saint Vincent Convent and, lastly, Family Representative at Kittay Senior Apartments.

Sister Elaine was a combination administrator, social worker, and pastoral minister. These skills helped form a creative spirit that encouraged her to think outside the box to improve the quality of life of those in her care. Two examples illustrate this: Sisters in education will recall the Futures Project she designed and the many discussions to enhance the teaching/learning process for teachers and students alike. The Sisters at Kittay will remember the bacon, sausage and scrambled eggs breakfast that Sister Elaine and helpers made every few weeks. What a unique way to build community spirit and, as one sister said, “It is amazing what an egg will do.”

Her final days were filled with fun and futuring as she attended the Federation Assembly of the Whole in Chicago. Imagine what conversations about this event she is sharing with the Sisters who have gone before her as she tells them: “You won’t believe what I did last weekend.” Rest in peace, Sister Elaine.

Burial
Cremains to be buried at later date.