As a minister of healing, faith in God’s constant help was her strength and gave her the hope that good will happen in lives. 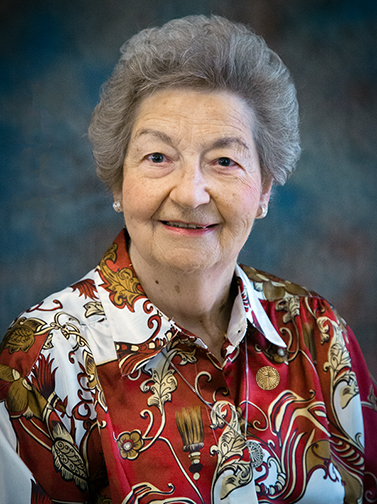 Sister Alberta Carey was born June 26, 1935, in Staten Island, N.Y., one of three daughters of Daniel and Lauretta Flannery Carey. Alberta attended Sacred Heart Elementary School and Saint Peter Girls High School, both in Staten Island, and Saint Mary Hospital School of Nursing in Brooklyn before entering the Franciscan Sisters of Saint Joseph. She received a BS in Nursing from D’Youville College, Buffalo, N.Y., and an MA in Administration and Supervision from New York University.

As a member of the Franciscan congregation for fifteen years, Sister Alberta served as a staff nurse, head nurse, night supervisor and Director of Nursing Services in hospitals in western New York State and as an instructor at St. Vincent’s Hospital School of Nursing, Manhattan.

Sister Alberta entered the Sisters of Charity of New York in 1975. Her ministries focused on her gifts for teaching and research to promote the health of individuals and groups from the perspective of societal issues. Over the course of nine years, Sister Alberta was an instructor in the School of Nursing of Saint Joseph’s Hospital in Yonkers, the College of Mount Saint Vincent in the Bronx, and the College of Staten Island. Her training as a substance abuse specialist made her a good fit as Coordinator and, later, Associate Director of the northwest Bronx Office of Substance Abuse, a ministry of the Archdiocese of New York.

When hundreds of HIV-positive babies were abandoned during the AIDS epidemic, Sister Alberta was asked to oversee the development of the former convent at Incarnation Parish in Manhattan to a transitional home for young patients. She later applied her interest in research as a Public Health Advisor with Health Research, Inc., and the New York State Department of Health in New Rochelle. Her last years of full-time ministry were as Nurse Administrator in the Bronx Psychiatric Center, earning the respect of her peers for her commitment to quality care for all clients.

In her final years of retirement, Sister Alberta joined the community of retired Sisters of Charity at Kittay Senior Apartments in the Bronx. She died on May 15, 2022, at New York-Presbyterian Allen Hospital in the 47th year of commitment as a Sister of Charity of New York and her 62nd year of religious life.

Reflecting on her life as a religious, Sister Alberta noted that through her ministry experiences, she learned firsthand the struggles and sorrows of families caught in the web of social diseases and poverty. As a minister of healing, faith in God’s constant help was her strength and gave her the hope that good will happen in lives.

Rest in peace, Sister Alberta, as your loving and faithful God welcomes you home.