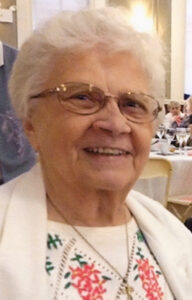 Sister Francis Marita Sabara was born in 1932, a year she recalled, “when the rent for a five-room apartment was $28 a month and a four-room apartment was $22, including steamed heat and running water.” She knew these details because her parents worked as superintendents of apartment buildings in the East 50s of Manhattan, the block between Second and Third Avenues. The neighborhood encompassed St. John the Evangelist Church and its parish school, then staffed by the Sisters of Charity. She entered the Congregation in 1951 and would find herself “coming full circle,” returning decades later to these same blocks as a teacher at Cathedral High School.

After graduating from the College of Mount Saint Vincent in 1954, Sister Francis taught first grade at St. Augustine in the Bronx for two years followed by five years teaching elementary school at St. Francis Xavier in Manhattan. “I loved the pure innocence of the little ones,” she recalled. These early years would lead to a teaching mission spanning five decades. She chose biology and the sciences for her specialty, largely because of their relationship to health and medicine. From 1961 to 1963 she taught biology, religion, and health at Elizabeth Seton High School in Yonkers.

Sister Francis was invited to join the first faculty at Elizabeth Seton College, once again teaching science and biology. “I appreciated the beauty of Seton College, its diverse student population and the challenges of being with them 24/7,” she said. While in Yonkers at Seton, she also became involved with the Catholic Interracial Council and served as the council secretary. The group took actions to push for integration of local neighborhoods, including acting as decoys to expose housing discrimination. She recalled, “In those days we were involved in hospitals and education, more so than in peace and justice issues, but we were there at the beginning.”

In 1967, Sr. Francis began a twenty-year appointment at Cardinal Spellman High School in the Bronx teaching biology and science. She also served as the band moderator, tasked with maintaining the uniforms, coordinating the music, and planning the halftime shows and concerts. “It was like a second full-time job,” she said. She fondly recalled the school’s “gifted students and fourteen years of marching in every New York City parade with the magnificent and award-winning band.”

Sister Francis spent the years 1987 to 1990 teaching at St. Ignatius Loyola on East 84th Street. She enjoyed the “highly spirited students who mirrored the enthusiasm and love for learning by its outstanding administrators.” After a time at Cathedral Prep Seminary in the early 1990s, with its young men discerning priesthood, she spent the years 1992 through 1997 at Cathedral High School in Manhattan “with its lovely girls of multiple talents and goals.”

With the turn of the millennium, Sister Francis committed her final years of full-time ministry to the elderly “from whom I learned patience and trust and faith in God.” Upon retirement, she enjoyed volunteer services, substitute teaching, and GED mentoring. She reports on her current situation, “I now enjoy living in the West Village with its varied population and many opportunities for God to let me work with Him in spreading the Good News.”