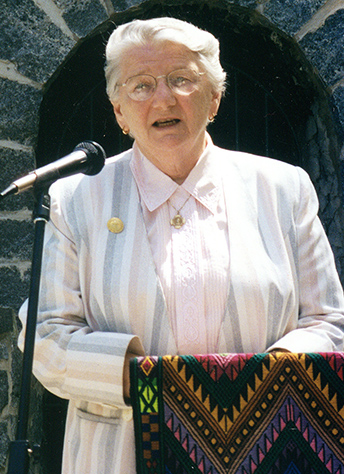 Sr. Elizabeth at the Grotto at Mount Saint Vincent on World Peace Day, 2002.

Before entering the Sisters of Charity of New York, young Elizabeth Vermaelen was asked by Mother Mary Berchmans, “What would you like to do as a Sister of Charity?” Sister Elizabeth recalls, “At that time, I did not feel qualified to really answer that question. What had inspired me was the little blue booklet, ‘Harvest in Springtime,’ which called for laborers. Consequently, I said that I just wanted to help with the mission in whatever way the Community thought best.” This sentiment remained her guiding light, expressed in the extensive and varied career devoted to the Community.

Sister Elizabeth entered the Sisters of Charity in 1951, received a BA from the College of Mount Saint Vincent and a master’s degree from Fordham University, both in French. She also attained degrees in Administration from Hunter College and in Theology from the Jesuit School of Theology in Berkeley, California.

For 25 years, Sister Elizabeth taught elementary, intermediate and high school grades. She continued to teach while serving in administrative roles, which included Chairperson of the French Department, Director of Student Activities, Dean of Students and Assistant Principal at Cardinal Spellman High School from 1971 to 1979; and as Principal at St. Gabriel High School in New Rochelle from 1980 to 1983. During this time, from 1971 to 1974, Sister Elizabeth also served on the Modern Language Council Board of the Archdiocese of New York.

Sister Elizabeth was a member of the Executive Committee of the Leadership Conference of Women Religious (LCWR), Region II, and was directly involved in the planning and facilitation of annual Assemblies from 1982 to 1985.

During Convocation ’82, the first such event held by the Sisters of Charity of New York, Sister Elizabeth offered a moving presentation on the theme “Elizabeth Seton: Woman of the Church,” analyzing the history and contemporary experience of the Church and the impact of the Second Vatican Council.

Sister Elizabeth was a trustee of St. Vincent’s Medical Center from 1984 to 1991. During that time, she also chaired the Board’s Education Committee and was vice-chair of its Quality Assurance Committee and part of the Hospital’s Mission Effectiveness Program. Her later work with the Catholic Network focused on financial modeling to recognize fiscal constraints within these networks. The impact of fewer Sisters working in hospitals presents a particular challenge to maintaining the religious community’s support.

From 1991 to 1995, Sister Elizabeth lived in Chicago, facilitating organizational development and community organizing for assemblies, leadership development and restructuring to Catholic orders and institutions, both domestic and international. Beginning in 2009, she served as administrator of St. Patrick Villa in Nanuet for seven years, a Congregation retirement home.

At the beginning of the first of two consecutive four-year terms as SCNY President, Sister Elizabeth stated, “We are looking now for a way to make every Sister of Charity part of a Corporate mission. We have three areas of focus: continuing our care of the poor, [developing] a particular way of responding to the needs of women, and enhancing the global inter-connectiveness that is a part of our reality. These are the values that we stand for. When there was a sister in each classroom, the assumption was that there was an influence on each of those students and their families by that individual sister. The same applied to nursing sisters on hospital floors and so on. Without that presence, you are looking for the Corporate entity to use resources in such a way that we are conveying the message about the values that we hold.” During her two terms, incentives included creating a Director of Retirement position, Office of Development, and construction of Seton Village in Nanuet.

Sister Elizabeth has received recognition for dedication in teaching, administrative and managerial roles, as Feasibility Study Coordinator for the Cristo Rey Program in the Archdiocese of Newark, N.J., a work-study program for inner-city students to attend Catholic high school, and in 1999, the Distinguished Service Award by the Sisters of Charity Healthcare on Staten Island, and the Distinguished Trustee Award for extraordinary service from the United Hospital Fund. In 2000, she received the Elizabeth Ann Seton Medal from the College of Mount Saint Vincent, the College’s highest honor.

A dedicated volunteer at the Congregation’s Archives, she is the “institutional memory” of the Sisters of Charity. She has written about the life of Elizabeth Seton, Mothers Superior of the New York Community, and spiritual reflections about charity and the lives of women religious.

Sharing her knowledge and expertise as a member of the Board of the College of Mount Saint Vincent, Sister Elizabeth continues to engage in projects that “help with the Mission,” a goal she expressed most poignantly nearly 70 years ago when she entered the Sisters of Charity of New York.